Hackers found a way to break into the Metropolitan Police careers website during a weekend in February and defaced the front screen by adding a photo of something resembling a mint-flavoured honey monster.

The defacement of the site also included the incomprehensible messages "Officer Brobee sez: oh hai guys do joos wanna bes a policeman lulz?" and "shouts to 1Dg1kal for being such a leet dude". The electronic vandalism was quickly purged from the site and normal operation resumed on the Monday morning.

Whilst this attack is of little significance in itself, it does show that even high-profile sites have weaknesses and that hackers apparently show little fear in exploiting them. I hope this will help you appreciate why we at Skill Zone are so paranoid about security. 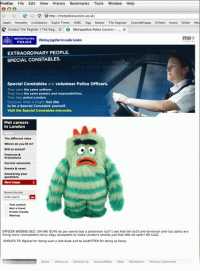