Conservative leader David Cameron caused a storm on Radio Four recently when he spoke about Twitter, not because he questioned the value of mundane ramblings that make up the bulk of Twitter postings, but because he used a four-letter alliteration which offended the sensibilities of the innocent listeners. But that isn't the only reason Twitter has hit the headlines recently.

The Twitter service was knocked offline for around 90 minutes on the 5th of August, with its users being presented with the "Fail Whale" graphic, and it struggled to resume normal service for much of the rest of the day. It later emerged that the cause of the failure was a well-orchestrated denial of service attack. It is worrying that even a major site like Twitter can be so easily felled by determined hackers, but even more concerning is that this attack appears to have been targeted at one particular individual who has used Twitter to make his political views known.

The Twitter account in question goes by the name Cyxymu which is a cyrilic approximation to Sukhumi, a town in Georgia. Cyxymu is an outspoken critic of Russia who uses his Twitter account to publish his pro-Georgian views. The cyber-assault against him came on the anniversary of the 2008 Russia-Georgia war in South Ossetia. The attack was unusual in that it wasn't just the normal denial of service from a botnet. It also comprised of some massive spam runs containing numerous links to the account to generate a lot of hard-to-block traffic from genuine users opening their email. Other sites where Cyxymu has accounts, such as Facebook, also reported attacks aimed at silencing the voice, but none had the same high-profile impact as the attack against Twitter.

Twitter still finds favour with journalists where novelty value is a substitute for news. This month we have had the "first live birth on Twitter" which began with a woman announcing to the world that her waters had broken. Is that news? We had the first video webcast of a live birth more than ten years ago. The Royal Opera House has also announced it is to stage the first ever opera written by members of the public on Twitter, which somehow makes me think of monkeys and typewriters endeavouring to produce the works of Shakespeare.

Not to be outdone, the politicians have got in on the act with the Labour Party appointing a Twitter Tzar to spearhead its new media drive in the next election. The chosen one is Kerry McCarthy, MP for Bristol who last month was named the most influential MP on Twitter and who apparently posts on Twitter as frequently as ten times per hour. Is this to be applauded? Personally I'd like politicians to talk less and listen more. 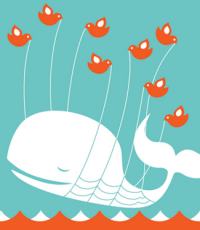