Anyone who remembers the 1960s might also remember those futuristic predictions of flying cars replacing buses and three small pills replacing the three course meal. Most of these predictions were quite silly, but one vision from more than 40 years ago turned out to be remarkably accurate.

In 1967, the BBC asked New Scientist editor Nigel Calder and computer pioneer Maurice Wilkes to speculate on what the revolution in information might mean 25 years into the future for a programme called "The world in a box". Their predictions proved remarkably accurate for the internet as we know it today. They suggested a machine (albeit the size of a desk), which would incorporate a telephone, keyboard, screen, microphone and video camera. Surely that description fits the modern laptop. They also predicted ubiquitous communications, information services, world wide instantaneous reporting, and the demise of the traditional newspaper. In a fantastically accurate prediction they said "The work of commercial and professional organisations will be transformed. There may be no very clear distinction between authors, scholars, publishers, librarians, television producers or anyone else who can be called an information mediator, but it will be their task to save mankind from drowning in its own information."

For an illustration of their concept, see:
calderup.files.wordpress.com/2010/04/worldbox.jpg

One thing Calder and Wilkes didn't predict was the opportunism that came with the internet. When the Icelandic volcano Eyjafjallajokull erupted this year it caused huge disruption to air traffic and a not insignificant amount of ash that needed clearing up in Iceland. One enterprising icelander immediately set up a web site selling small glass jars of souvenir ash for which he is charging an amazing Ł75.

Another thing they didn't predict was the increase in "photography" on the net. This month beaver experts from the Buffalo National Park in Alberta reported they have found a beaver dam so big that it can be seen from space. A biologist said that at 2,790 foot long, the beaver dam was more than twice the length of the Hoover Dam. But as in all these "seen from space" stories, it actually meant that it could be seen on the aerial photography of Google Earth, not satellite photography from outer space. 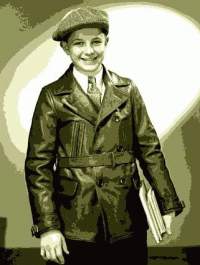