Don't get mad, get even

We've all felt frustrations with our computers, but mostly we keep it under control, unlike Joshua Lee Campbell of Salt Lake City who got mad, got drunk, and then shot the company server with his revolver.

According to the Salt Lake City Tribune, 23 year old Campbell, an employee of RAN Life Home Loans, opened fire on the computer, shooting it seven times. He then called the police to tell them he had been drugged and mugged by a mystery assailant who stole his 45 calibre hand gun and caused the damage to the system. However, fellow workers told police they'd been drinking at an open air concert that evening and Campbell, apparently unhappy with his job, announced his intention to shoot the $100,000 computer.

Campbell has been charged with a range of minor felonies including criminal mischief, carrying a dangerous weapon whilst under the influence, filing a false police report and, perhaps most seriously in the state of Utah, public intoxication. When the responding police unit arrived at RAN Life offices, they found Campbell happily passed out on the floor.

Disappointingly, no one has reported on the condition of the computer. Suffice to say that a 45 calibre hand gun fires a pretty substantial bullet. And sadly, we don't know what the computer said that caused Campbell to see red. 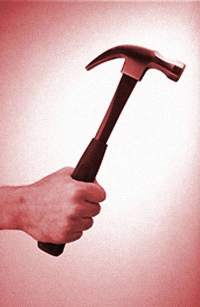