Double Irish and a Dutch Sandwich

Google, one of the world's biggest businesses, has saved itself over three billion dollars in tax since 2007 using techniques known to accountants as the "Double Irish" and the "Dutch Sandwich".

Google's money machine continues to crank out the dollars. Recently released figures show revenues of $7.3 billion for the last quarter, a massive 23% increase from the same period last year and putting it on course for around $29 billion in total for 2010.

Google has large offices in central London (and other cities throughout Europe), but the London business pays no UK tax. It is treated as part of Google Ireland Ltd so that Google can take advantage of Ireland's much lower business tax rates, the lowest in the EU. Google Ireland Ltd is the business which accounts for 88% of Google's non-US advertising sales worth $12.5 billion per year.

However, Google Ireland further reduces its tax bill by paying licensing fees for the use of Google technology to a second Irish company, Google Ireland Holdings (hence the name "Double Irish"). These royalty payments are then transferred to Google Netherlands Holdings (the Dutch Sandwich), which in turn transfers the money to Google's management centre in Bermuda, where it pays no tax at all.

This complicated money shuffle allows companies such as Google to claim their expenses are incurred in countries with higher tax allowances whilst shifting the profits to countries with lower tax rates. The US Corporate Tax rate is 35%. In the UK it is 28%. By completely legal accounting, Google has reduced its overseas tax burden to just 2.4%.

It may be 100% legal, but is it fair? Countries like Ireland offer low tax rates to attract investment into its economy and to encourage the establishment of local businesses. Is it fair that companies can use Ireland as an office of convenience whilst taking advantage of the infrastructure of other countries which receive no tax payments at all? Is it fair that the third largest company in America can use its size and multi-national structure to pick and choose tax rates whilst smaller enterprises have to pay taxes at ten or fifteen times the rate that Google pays? 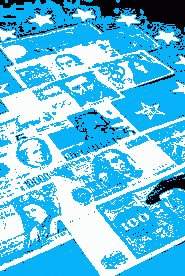