Whilst Google is adept at turning clicks into revenue, other popular services have struggled to monetise their popularity. Twitter is a global success story, but its investors need to see that success turned into dollars.

Google began as (and still is) a great search engine. It first introduced adverts in the form of text ads down the right hand side of the screen. To avoid calling them advertising, it dubbed them "sponsored links", and reminded users that you cannot buy top spot in Google search results. Some time later the sponsored links also found their way to the tops of search results, but still clearly labelled as sponsored links. In the most recent "suggest as you type" version of Google, the coloured background of the sponsored link has disappeared and only a small grey legend indicates the difference between the paid for advert and the true search result. Yet Google would still insist you cannot buy your way to the top of the search.

Twitter looks like it is taking a leaf out of Google's book. Just as Google labelled its adverts as "Sponsored Links", Twitter is calling its adverts "Promoted Tweets", and is at pains to point out it isn't really advertising, saying: "Since all Promoted Tweets start out as regular Tweets, there is not a single ad in our Promoted Tweets platform that isn’t already an organic part of Twitter." Twitter also plans to post promoted Tweets at the top of your Tweet search pages. But will anyone pay serious money to be a promoted Tweet?

The BBC is certainly embracing Twitter and many of its radio programs ask people to Tweet in comments rather than send them by email. More recently, viewers of TV programmes such as the latest series of "Have I Got News For You" may have noticed the cryptic text #bbcHIGNFY on the foot of the screen during the opening credits. This is a "hash tag" which you can type into a Twitter search to find tweets tagged with the #bbcHIGNFY code.

So why is the BBC using this strange hash code on some programmes with no further explanation? Does its research tell the BBC that its audience is made up of Twitter users who already know what the code is all about? Or is it just the BBC trying to be trendy and cliquey, like a pensioner trying to talk the language of teenagers?

Whatever the reason, the BBC is cultivating interest in its programs via Twitter without the cost of promoted tweets, and that raises more questions for Twitter. Why should an organisation such as the BBC pay Twitter for promoted tweets when it can so effectively promote tweets through its own channels?

That broader question applies to all businesses. Is a promoted Tweet really going to be an effective way to promote yourself? It might work for a few trend-setters who work out a clever way of using it to kick off a viral advertising campaign, but can it really bring in the long term advertising business that Twitter's investors are looking for? 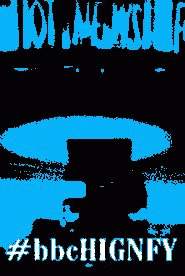