Empowerment is a term often used in connection with the internet, and assumes that making information available can only be a good thing, but a survey by the insurers Direct Line shows the flip side of that coin.

Back at the start of the year, the Home Office launched its crime maps. The police website allows you to enter your postcode and see a Google map of your area complete with statistics on the number of reported crimes in the area. It really is an impressive piece of programming and allows you to drill down to smaller areas and see breakdowns by the type of crime reported, such as burglary, car crime and anti-social behaviour.

Why do we need such a system? The Home Office stated "Crime maps will allow residents to hold their local police to account for the level of crime and antisocial behaviour in their neighbourhood, pushing police to tackle crime which really affects the local community."

So crime maps empower the citizen, and make the police more accountable to the community, but that's not necessarily what they are being used for. People buying houses quickly realised that the crime maps are a good visual aid to working out which parts of town are desirable areas to live in, and which are the parts where you will need to insure your hub caps.

And now, according to the results of the Direct Line survey, we are seeing an unexpected reaction to that use of the maps. It seems that people who are aware of the maps and are trying to sell their properties are less likely to report lesser offences such as anti-social behaviour, drug dealing and vandalism for fear that it will devalue the neighbourhood. People are more than happy to use the crime maps to check out the area they are moving to, and presumably want those maps to be as accurate as possible in that instance, but at the same time they want their own neighborhood to be painted in a more favorable light. Since the crime maps went online, Direct Line estimates that as many as five million crimes have gone unreported as a result of people wanting to protect their property values. 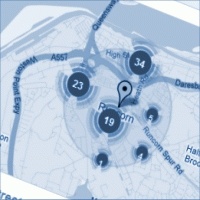