So how tough is your computer? Would your laptop survive if you knocked it off the table? How would your phone fare if it fell from a second floor window? And what about the third floor? Or the fourth? Some of our computer gadgets are a lot stronger than you might expect.

Last year, Ron Walker, a USAF airman and parachute instructor was leaning out of the aircraft door at one thousand feet when his iPhone slipped from his pocket and plummeted to earth. Walker used "Find My Phone", an application designed to help you find your phone when you can't remember where you left it by displaying its location on a map, and was surprised to find it was still working well enough to be able to report its position in some nearby woodland. It took him just one hour to find it. Initially he hoped that might be able to recover his contacts from the phone but when he found it, the device was in full working order without even a scratch on the casing. That's pretty impressive. The pine needles of the woodland probably cushioned the impact, but its still pretty impressive.

Even more impressive though is this next tale. Boldly going where no computer has gone before, the ruggedised case maker G-Form wrapped an Apple iPad in one of its protective holders which leaves the touch screen exposed so the computer can still be used as normal. The iPad was sent skyward using a weather balloon to a height of 100,000 feet (just short of 19 miles) before dropping it to see if it could survive the fall. That's not really "space". To be considered an astronaut by NASA you need to pass the 50 mile mark, but its about three times higher than any commercial airliner cruises at. The iPad fell 100,000 feet and crashed into a rocky hillside.

The voyage was recorded by a small video cam attached to the side of the iPad and the evidence is on YouTube for all to see. Incredibly, not only did the iPad survive the fall unscathed, but the camera survived too and can be seen to be still recording when its lying on its side in the Nevada desert. 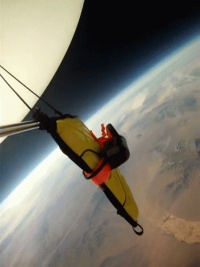