The oldest swinger in town

Computing has always been portrayed as the province of the young man, but still it comes as a shock to find I am too old to join a social network.

Social networking sites are all the fashion these days, with the likes of Facebook and MySpace becoming household names, but one of the few UK-based networking sites, faceparty.com, has upset some of its community by deleting profiles of people who are considered to be too old. What is too old? In this case, the grand old age of 36. The following statement comes from a page on its website explaining why your account might have been deleted:

Over 36 years old? New government legislation means we need to check older users on the sex offenders list. This legislation is based upon checking email addresses against a government provided list. Faceparty has never insisted on validated email addresses and can therefore not participate in this new scheme. Having discussed the use of our website with the home office and the police, and further some pretty serious crimes caused by older users, we were left with no option but to terminate a huge amount of accounts, and without notice, immediately. We understand that only a minority of older users are sex offenders, but you must understand that we cannot tell which - we can only delete all to make the site safe and we apologise for that. However, we are following the law and you cannot think we are wrong for doing that.

It is true that the Home Office has put forward proposals requiring community sites such as FaceParty and Bebo to vet email addresses but anyone who uses the internet knows how easy it is to obtain anonymous accounts at Hotmail et al and thus circumvent a Home Office list. It is also pretty obvious that the problem is not so much with older users per se, but with older users who have signed up pretending to be 14 years old. And of course, these vetting procedures could only be enforced on those sites which are UK-based, such as FaceParty. In an interview with the BBC, the Home Secretary, Jacqui Smith, said she accepted such a scheme could never be "completely foolproof" but did not see that as a reason not to try. Others would argue that ill-conceived schemes do not solve the problem but can give a dangerous false sense of security.

FOOTNOTE: For readers far too young to remember Fred Wedlock's 1981 hit, "The oldest swinger in town", copies can be found on the new-fangled YouTube. When I was 25, that song was hysterically funny. These days it is hysterically accurate. 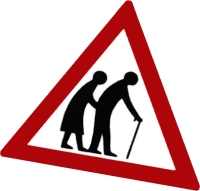