In December, the US announced that it was to sell four hi-tech high altitude spy drones to South Korea at a cost of a little over a billion dollars. Meanwhile, computer programmer Ed Scott has built a working spy drone for his son using 117 blocks of Lego.

Its not entirely made of Lego. The bricks form a spider-like chassis and have been glued together for extra strength, and each of the four legs has a battery-powered propellor attached to it to provide lift. The central hub carries the radio equipment needed for remote control, and a computerised control unit to make the device easier to fly.

So far there is nothing so unusual about this design and there are similar ready-built flying quad designs readily available in the shops. However, Scott's device is fitted with two digital cameras, one to give a forward view which is transmitted over the radio and viewed by the remote pilot through a headset, and another camera which records hi-res aerial shots to a memory card.

That combination is impressive enough, but Scott also added a GPS chip to the control box, and this allows the device to take off, follow a preset route, take photographs along the way, and then fly itself home again. Here is the video Scott made which shows the drone in action.

On the one hand, its fantastic that technology has become so cheap and modular than anyone can now tackle engineering projects for fun at home which would have been multi-million dollar military projects just a few years ago. On the other hand, if anyone can fly a spy-cam anywhere, you just know that a lot of people will delight in invading the privacy of others. How many cases will we see of opportunistic voyeurism outside bedroom windows, of industrial espionage, or criminal reconnaissance before we hear the calls for Lego helicopters to be banned? 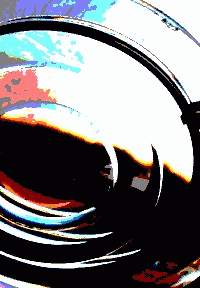