Star Trek fans like to claim that the communicator was an example of Gene Rodenberry predicting the mobile phone, although if it was, he completely missed text messaging, touch screens, and the built in cameras. Soon, UK sci-fi fans will be able to point to a talking head on their mobile phone and say "that was invented on Red Dwarf".

Engineers from Toshiba's UK Lab have collaborated with Cambridge University's engineering department to develop some surprisingly compact software which generates a representation of a human face, and rather like Holly, the ship computer on Red Dwarf, the disembodied head floats on a black background. The face can simulate six basic facial expressions and a range of voice intonations, and can take simple text and intelligently convert it into a realistic representation of the way a human would communicate with you. For a video of "Zoe" in action, see:

The concept behind this is that the face could be used as a digital assistant, sitting in the corner of the screen, and provide a more natural feeling interface to voice command systems and for functions such as reading email.

A talking head could greatly improve the clarity of what we hear. Psychologists have long known that when we hold conversations, our brains interpret language not just by the sounds that reach our ears, but also by the accompanying visual clues we get from facial expression and the shapes of the mouth as it forms words. Its called the McGurk effect, and these videos give good examples of it in action. 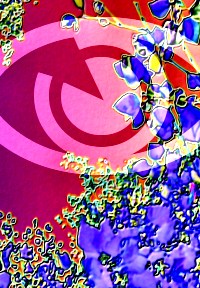