Who would have thought a printed black and white square image would become so important in this all singing, all dancing, all connected internet age?

Rio de Janero, Brazil, has undergone extensive redevelopment as it prepares to host the finals of the Football World Cup 2014, and just two years later, the 2016 Olympics. One of the more imaginative ways in which it has combined the city facelift with the need to provide tourist information to the huge influx of visitors is to create pavement mosaics in the shape of QR codes. When the tourists walk along the beach road at Ipanema, for example, in between the mosaics of fish, seascapes and traditional abstract designs, there will also be QR codes in the same mosaic style which link to a page on a website where the tourist can find a guide map and more information about that location.

This great idea was first used in Portugal and has also been seen in Gibraltar. I expect many other architects and tourist organisations to follow suit. However, I hope they realise that this needs to be seriously long-term commitment. A hundred years from now, those QR codes will still be embedded in the pavements of Rio, but will the addresses still work?

No-one in the world has any experience of running a website with stable addresses for anything like that length of time. It is hard to find any existing website which is more than twenty years old and the web itself is only thirty years old so building a website to last a hundred years is definitely new territory. The problems of permanence can be overcome, but it needs planning, and it needs genuine long-term committment.

Another organisation which is adopting a long-term, if not eternal, QR code strategy is the Commonwealth War Graves Commission which began a QR code project on the 671 war graves of men and women at Botley Cemetary in Oxford. A panel installed at each grave will link it to information telling human stories using text, extracts from diaries and letters, photographs and audio and it is intended that the system will allow researchers to add history to the site as the project develops. The commission plans to install similar panels at some 500 sites that it manages across Europe with completion scheduled to coincide with 2014 anniversary of the outbreak of the first world war.

The elegance and versatility of the QR code has given rise to a surprising category in the Guiness Book of Records for World's Largest QR Code, codes so large that they can only be seen properly from the skies, such as this code painted on the flat roof of a building:

This next code painted on a racetrack was created specifically to capture the record and was visible from an altitude of more than two miles:

The current record holder for world's largest QR Code is the Kraay Family Farm, in Alberta Canada which last year created a corn maize maze in the shape of its QR code. The all-green code was an astonishing 28,760 square meters in size, yet it was still possible to scan it correctly from a helicopter. Other imaginative attempts at world records include a bid from India for the largest edible QR code made out of cake, but one of my favourite large QR codes is this artistic living code created by an army of volunteers on the Mission Hills golf course, China. 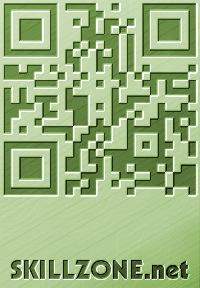