It is rare in technology for something to have endured 30 years, but the MIDI standard, conceived in 1983, remains the lingua franca of digital music.

Back in 1983, when UB40 was topping the charts with Red Red Wine, and Culture Club were releasing Karma Chameleon, synthesisers and keyboards were still in their early years of development. They created an amazing array of synthesised sounds that we'd never imagined before, but just like any other electric instrument such as a guitar, the only output was the complex sound wave that fed into the tape deck.

This changed when two of the pioneers of electronic musical instruments, Dave Smith and Ikutaro Kakehasim created MIDI, the Musical Instrument Digital Interface standard, and made it a royalty-free standard for the whole industry.

MIDI isn't a piece of electronics or a device. It is a language, a form of music notation. When you press middle C on a piano keyboard, it plays a note, but a MIDI keyboard can record which key you press, how hard, and for how long, and expresses it in a universal digital notation that other MIDI musical instruments can understand.

The first uses of MIDI was for sequencers. Musicians could record complex sequences of music as a MIDI sequence and then have the synthesiser play that sequence for them using different synthesised sounds and repeat that sequence flawlessly as many times as required. Instruments such as guitars and drum kits appeared with MIDI interfaces which allowed the guitarist to play a piece on his guitar but play it through a synthesiser which could ascribe quite different qualities to the sound. Equally, a piano player could use his keyboard to play a drum machine if he wanted to.

With the advent of computers, MIDI really took off, allowing musicians to perform complex composition, editing and mixing on screen, and to perform the once impossible tasks of changing the tempo of a recording without affecting the pitch, or change the pitch whilst keeping the same tempo. Its also been used in ways that the originators scarcely have imagined, to control things such as the light shows at concerts and synchronise it with the live performance.

The great thing about MIDI is that there is one standard and it just works, the manufacturers even agree on a standard plug size, and if you found a MIDI keyboard from 30 years ago, you could plug it into the most modern synthesiser today and it would probably still work. If only all technology standards were that reliable. 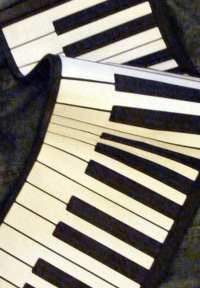