Gearing up for a 3D Christmas

The much-talked about 3D printer has finally arrived as a consumer item. The Cube is in PC World, in time for the build up to Christmas, but at over a thousand pounds per unit, the technology is not cheap.

By now everyone has heard the prophets of technology rave about 3D printing, how you can "print anything you can imagine" with a 3D printer, from teapots to false teeth, and how it will revolutionise product distribution. Broken a plate? Print a replacement. Want a fancy vase? Browse a library of free design files for vases and print the one you want. Chess enthusiast? Design and print your own unique chess pieces. Need an intricate replacement dial for the washing machine or a plastic trim for the car? Buy the appropriate file from the manufacturer and print it at home the same day.

It isn't quite so simple. The size of the printer limits the size of objects you can print, and in The Cube's case that's a maximum of 5.5 inches in any dimension which would be a rather small teapot or vase and too small for most pieces of plastic car trim. Neither do objects emerge ready assembled with perfect finishes. In many cases you would need to trim off supporting spars, polish a surface, and perhaps paint on a design or apply symbols to the washing machine dial. The printer can only print in plastic, so objects have limited structural strength, and whilst it could print the bodywork for a small toy car, for instance, it obviously cannot print the electric motor, wheel bearings and rubber tyres. The speed of printing may also surprise some people. According to the manufacturer, printing a simple cover for your mobile phone takes approximately two hours.

I would also take issue with the claims that 3D printers let us print "anything we can imagine". In theory, the humble paint brush and ink lets us paint anything we can imagine, but for most of us, our imagination exceeds our talent. The same is going to be even more true of designing 3D objects. We might master the software enough to tweak other people's designs, but designing original objects from scratch is no mean feat and 3D scanners are still some way off.

PC World is offering The Cube with a UK shelf price of Ł1,195. Not only is that significantly cheaper than other 3D printers, but it also looks like it has been designed as a desktop item for the home market rather than $2,000 Replicator which looks just like a microwave oven, or the exposed cogs and wheels of the $1700 LulzBot which looks like it would be more at home in a machine shop. The initial cost is only half the story though. You also need to factor in the significant power usage (probably around 400W when printing) and the cost of consumables, the ABS plastic which it uses to build the 3D creations, and this isn't cheap.

The plastics for The Cube come in preloaded cartridges in a choice of bright colours including black, white, red, magenta and green. The printer can only print an individual object in one colour though. Each cartridge weighs 900g, (but it appears that includes the weight of the cartridge itself), and costs Ł52. How much printing you can do with that depends of course on the complexity of the objects you print and whether they are hollow or solid. Suddenly that 32 piece custom chess set you were imagining is starting to look quite pricey.

This is just the first steps into a new technology. Mainstream printing giant Hewlett Packard is planning on bringing its own 3D printer to market in the middle of next year but says it thinks it will be another three years before 3D printing really takes off as a consumer product. 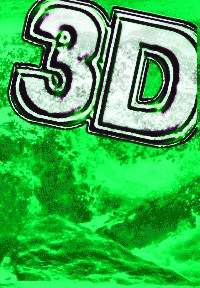