The rise of the cyborgs

First launched at the TED Conference held in Edinburgh, 2013, Michigan company Backyard Brains is bringing you RoboRoach, a neuroscience cyborg kit, just in time for Christmas.

So what is RoboRoach, the kit that claims it gets kids interested in neuroscience and lets ordinary people do graduate level research science in their basements? Its a tiny piece of electronics which is packaged as a cockroach backpack, and which allows you to interact with the roach nervous system using an app on a mobile phone. That sounds quite cute, educational even, and costs just $99? But the devil is in the detail.

First you submerge your roach in ice and water until it becomes unconscious. Then the waxy shell at the back of the head needs to be sand-papered away, a pin is used to make a hole in the body to insert a wire, the backpack circuitry is glued to its back, and finally the antennae are cut off and electrodes inserted into the wounds. By this time the roach has recovered from the ice shock and now, when it makes its bid for freedom, you have a remote controlled cockroach where you can make it turn left, right or walk around in circles just by tapping a button on your mobile phone. This, claims Backyard Brains, is the world's first commercially available cyborg.

The UK has strict laws controlling the use of animals in experimentation but that protection does not extend to invertebrates. This kit may be legal in the UK, but is it ethical? Is it ever right to let kids think that any living creature is simply a convenient toy for them to hack into until they get bored and move onto something else? A cheaper way to make a cockroach walk in circles would be to snip off the legs on one side, but most people would think that was just unnecessarily cruel and pointless. Incidentally, Backyard Brains also sells a kit for measuring electrical impulses in snipped off cockroach legs, or for making the severed leg dance in time with your iPod, which some might think is hilarious entertainment for the whole family. Of course, you need a freshly cut cockroach leg for this to work, but don't worry, says the instructional video, they grow back. 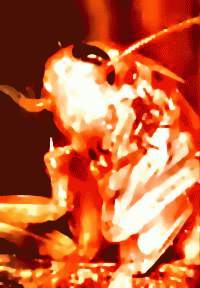