Three scientists from Japan have been awarded the 2014 Nobel Prize for Physics for their invention of the blue light emitting diode back in the 1990s. This may sound insignificant compared to, say, the detection of neutrinos or the measurement of the expansion of the universe, but its impact on all of us is greater than you can imagine.

First the physics. The traditional incandescent lamp we all grew up with consists of a tungsten filament inside a bulb filled with a non-reactive gas such as argon or nitrogen. The filament is heated by the electrical current until it becomes so incredibly hot that it glows, emitting a broad spectrum of visible light plus an awful lot of waste heat.

The Light Emitting Diode, or led, works on a completely different principle and relies on quantum physics. Electrical energy nudges electrons within the diode to a higher energy state for a brief instant before they revert to their previous state, performing a quantum leap which releases the energy as a quantum of light, a single photon of a precise wavelength. A single photon would be invisible to us but this happens billions of times a second and almost all of the electrical energy is converted to light, rather than heat.

This electroluminescence effect was discovered in 1907 by the British scientist H J Round, but there was little practical use for the effect at the time, and it wasn't until the 1960s that visible spectrum leds became economic and available. The early leds were red, not because they were housed in red plastic, but because this was the wavelength of the light emitted by the quantum transition. Red leds immediately became popular as low-power long-life indicator lights in electronic circuits and you will have seen them used in calculators, digital clocks and watches. The first digital watch with a led display was the Pulsar which went on sale in 1970, but Pulsar's prototype watch appeared in Kubrik's "2001: A Space Odyssey" back in 1968.

It didn't take long to find a way to make diodes which produced green photons instead of red, but blue, that other component of white light, being higher up the energy scale, proved to be much more challenging, and at the time, there was no perceived commercial value in making a blue led. Three researchers, Shuji Nakamura, at the University of California, along with Isamu Akasaki and Hiroshi Amano of Japan, under-funded and often working in their own time, conducted countless experiments over a six year period, from 1986 to 1992, to develop a method of building crystals of gallium nitride, the material which makes blue leds possible.

WHERE ARE THE BLUE LEDS?

Look around your office and you will probably spot quite a few red or green leds, as power indicators on your computer, your monitor, your phone cradle, but where are the blue leds? You are probably looking at them right now. If you are using a flat screen monitor, or have a flat screen TV at home, it is almost certainly an LED screen which uses red, green and blue leds to produce its crisp and fast-moving images. If you have a smart phone or tablet, that too has a full-colour LED screen which is only practical because of the low-power requirements of leds.

The technique used to make the blue led also made possible the blue led laser which, because it has a shorter wavelength than the old red laser, has a much more compact beam, and it is this which gives us "Blu-ray", the DVD standard which enables us to pack much more information onto a compact disc. Another result of blue led research is that we now have white leds, and you will increasingly find these in hand-held torches, car headlights, the illumination rigs used in theatres, the flash on your digital camera, and even for lighting up party decorations. Right now, in your local supermarket, in the Halloween section, you can buy ninety nine led balloons.

We humans love light, but in some parts of the world, light is still a luxury. Because leds run off low voltages and have low power requirements, you can use leds to get decent white lighting without needing to be on an electricity grid, and its quite possible to run them off rechargeable batteries, a small portable generator or some form of renewable energy supply. A tungsten bulb is inefficient and as much as 95% of the energy is lost as heat. A 20W low-energy bulb based on a fluorescent tube produces as much light as a 100W tungsten bulb which is a big energy saving, but a led bulb is even more efficient and would only need about 15W of energy and operates at much safer voltages.

We used to buy tungsten bulbs according to wattage, the amount of power they consumed. Nowadays, bulbs will be rated by how much light they emit, which is measured in lumens. As a guide, an old-style 40W bulb produces about 440 lumens. A 6.5W led bulb which plugs into the same socket produces 470 lumens, and is completely cold to the touch when turned on.

The other factor that makes led lighting so compelling is its resilience and longevity. The old incandescent bulbs, as well as being fragile, would slowly burn out. Typically an average lifespan is between 1,000 and 2,000 hours of domestic usage. That is only an average though and there are exceptions. There is an incandescent bulb in the Fire Department at Livermore, California which, according to the Guinness Book of Records, is known to be over 100 years old and is still used pretty well every day.

Leds also wear out eventually but are much more reliable than tungsten. As led bulbs often contain a cluster of leds rather than the single filament of a traditional bulb, the odd led failure does not plunge the room into darkness. Furthermore, leds typically fade with time rather than suddenly burn out. This all has obvious benefits for use in critical applications such as traffic lights and car brake lights, for instance.

It is claimed by manufacturers that leds will, on average, produce a usable light level for 25,000 hours of usage, which is just over 17 years if used for an average of four hours each day. Is that a realistic estimate? Some people think it is commercial hype. Others think it may be overly conservative. The manufacturers are claiming the average life span of the current led bulbs will be 20 years in normal usage. I have a digital clock which uses red leds for the digits and indicators, and it has been running more or less continuously for over 25 years now without failure.

The time when a householder will change a bulb once in their lifetime is not so far away. 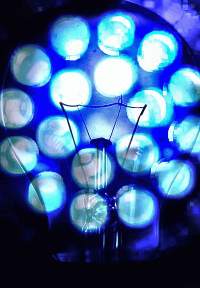