Drones were in the news again this month when one was flown over the Serbia versus Albania football match, trailing the Greater Albania nationalist flag and provoking a riot which led to the match being abandoned.

This story had a lot of coverage in the sports pages, UEFA launched an investigation into the riot and will take disciplinary action against the teams and players, the Serbian government summoned the Albanian ambassador and demanded an explanation, and former referee Graham Poll said "Refs are told what to do in the event of a major incident before every UEFA match but I doubt drones were on the agenda".

But why not? If a fan ran onto the pitch there would be an immediate security response before they got anywhere near a player. In all of this, no-one seems to be thinking that a drone flying over a crowded football stadium is in itself inherently dangerous.

Drones are being sold worldwide with very little regulation and no need for training, no need to have obtained a licence or shown basic competency, and very little awareness of local air traffic rules and regulations. The fans of these machines say they present no danger because they fly themselves, they don't just drop out of the air. Well watch this video. It is footage taken by a War Hawk Quadcopter which was being flown by an experienced pilot when nature decided to bite back. 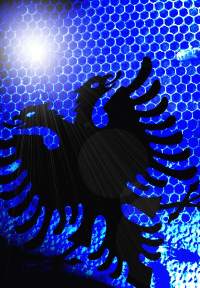