Giants of the TV age

At one time, the fireplace was the centre piece of the living room, but since the 1950s it has increasingly been the TV set. On March 23rd of 1951, the world's largest TV was unveiled in Houston, a huge 30 inches. In March 2015, the large TV of modern times is the LG Electronics curved screen monster which measures 105 inches across the diagonal.

When TV sets used cathode ray tubes, the set had to be as deep as the screen was wide which somewhat limited the practical size of a TV. Larger TVs also had a considerable weight of glass behind them, and considerable power requirements to energise so much phosphor. Modern flat screens largely overcome these problems and the screens we watch commonly today are much bigger than those our parents watched.

Whilst other manufacturers are also making screens around the 100 inch mark, LG's claim to fame is that it is the largest of the curved screen models on the market. The LG105 exceeds the 4K high definition of its competitors by having a pixel size of 5120 by 2160. It also includes two 150 watt speaker units. Add to that, there is a USB connection and a built in camera with an astonishing 8 megapixel resolution, so if you want to webcam with it, you'll be able to see every blemish and pimple displayed across one wall of the house.

If you want to get one up on the neighbours, this is clearly the piece of hardware you need in the living room. Or is it? Before you rush off to order one online, keep in mind that 105 inches is almost nine feet from corner to corner. Surrounding the screen is several inches of bezel, and underneath it is a heavy duty stand which makes it bigger still. Its not just a question of whether or not it will fit in your living room, its a question of can you even get it through your front door and round the corner in the hallway into the living room. I guess though, that if you can afford around Ł70,000 for a TV set, you are not likely to be troubled by such details as getting it in the lift and up to the flat on the third floor. Now if only there was something worth watching on telly,.... 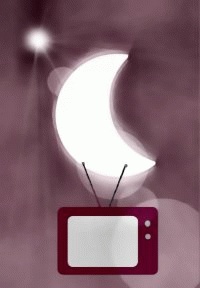