The helicopter drone continues to be the cool toy to have with more and more models coming onto the market, from tiny models for indoor operation up to eight-engined monsters capable of carrying large professional cameras. But with no need for a license or training, and seemingly little regulation, are they an accident waiting to happen?

Earlier this month, a fast-moving brush fire broke out alongside Interstate 15, the main route between Southern California and Las Vegas. Such was the severity of the blaze that cars on the interstate caught fire. Dozens of vehicles had to be abandoned, engulfed in flames but thankfully all the occupants appear to have escaped unscathed.

Some twenty vehicles and eight homes were destroyed in the incident. Firefighters attempted to control the fire by dropping flame-retardent chemicals from helicopters, but discovered their job was made much more dangerous by the presence of five drones in the airspace. Whilst three of the drones cleared the area quickly, two remained, and tried to keep up with the firefighter's lead helicopter, one above it, the other below. Helicopters are fragile beasts which have no ability to glide in the event of engine failure, so the pilot quite rightly decided to break away rather than risk a potentially fatal collision, all of which contributed to the delay in tackling the fires.

Were these drones operated by professional photo-journalists, amateurs who saw an opportunity to sell some footage to TV companies, or people who just wanted to rubber-neck from the air? We will probably never know since drones carry no identification and anyone could have been operating it. Were they breaking any laws? Possibly, but this is a grey area in the USA. However, as a result of this incident, California's politicians are now writing up a law to allow the firefighters to incapacitate drones which are interfering with their ability to respond, and crucially, which indemnifies the emergency services against being sued by the owners of any drones damaged as a result.

Another concern with drones is their excursions into controlled airspace, particularly around airports. In June, a drone caused a stir at Dallas Love Field airport when it flew across the path of an incoming Boeing 737 jet. The FAA regulations have a five mile exclusion zone around this airport and also limit drones to an altitude of 400 feet, so this drone violated both regulations. The FAA is investigating but so far has been unable to find the owner of the drone.

Are such incidents rare? Not at all, according to Britain's Civil Aviation Authority. In the last year, they have had six cases of near misses with drones, including one in which an Airbus A320 taking off from Heathrow missed a hovering drone by just 20 feet. If the drone had been sucked into the engine during that critical phase of the flight, it could have caused catastrophic loss of power. Lufthansa had a similar incident this month as one of its planes was coming in to land in Warsaw, and a few days earlier, a US Airways flight passed within 100 feet of a drone in North Carolina.

Now if you think flying drones around aircraft is crazy, an 18 year old weaponising a drone is even crazier, and yet this is not illegal in Connecticut, USA. An 18 year old drinking beer would be illegal as the legal age in that state is 21, but weaponising a drone is just fine. This is the footage of a home-weaponised drone copter. Warning, this video contains loud bangs. 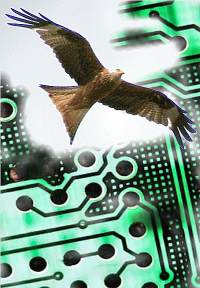