Human-like robots are entering our space with varying degrees of acceptance and the varying ways humans will accept life-like robots was explored in the thought-provoking TV drama, Humans. But what happens in unscripted real life?

One interesting experiment in the area of human android interaction is HitchBot. HitchBot is a small humanoid-like robot in the sense that it has a cylindrical torso, arms, legs, a smiley face and sometimes sports a Boston Red Sox jacket. Its sole purpose in life is to see if it can hitch a lift from passing motorists, and it carries a note telling any good samaritan where it is trying to get to. Its Canadian creator set it loose in Halifax, Nova Scotia to see if it could make its own way across the country to Victoria, British Columbia. It completed the feat in 26 days, hitching 19 rides and covering 10,000 miles. In similar experiments, it has also enjoyed mini tours of Germany and the Netherlands.

However, the latest journey in the USA was not so successful. It attempted to hitch from Salem, across country to San Francisco. It was found in Philadelphia, decapitated, with its electronics stolen. It now lives on via its Facebook page.

As humans we have a tremendous ability to empathise with animals and even inanimate objects like robots. The degree to which we have become accustomed to automata is reflected in the changing way they are used and depicted in adverts. We were never quite sure if they were robots or aliens or both, but this advert reflects our idea of robots in the 1970s

Twenty years later, Citroen treated us to the industrial paint sprayer robots which had lifelike fluid movements, character, and a sense of individuality, where the robot was naughty, playful, whimsical, where the robot was the slave and the human was the heartless overlord. Admit it, we all sided with the robot.

Bringing us up to the present day, this next advert, "Respect the tech" was made for showing during this year's American Football grand final, the Superbowl. To improve your appreciation of the subtleties of this advert, I'll point out that two arms held aloft is the signal used in football when a team scores a touchdown. It says something about us as a people when I think the reader needs a sporting term explained, whereas the android paradigm is self-explanatory. 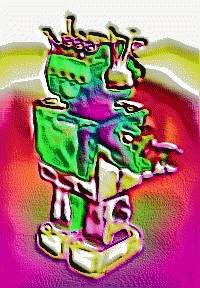