The spirit of invention

Hobby drones are commonplace, and larger quadcopter drones capable of carrying payloads of around two kilos are readily available, but how long will it be before someone uses drone technology to build a personal helicopter? Well, in a back garden somewhere in Britain,....

Personal drones continue to be in the news for all the wrong reasons. Four separate airline pilots recently reported seeing a drone at between 2,000 and 3,000 feet on the approach to Liberty Airport in Newark, New Jersey, but encroaching on commercial flight paths is becoming such a common event that it rarely makes the news anymore.

In Cincinnati, a drone operator lost control of his machine whilst flying it over the city, (contrary to FAA regulations) and crashed it into the 28th floor of The Great American Tower, a skyscraper on Third Street, knocking a hole into the glass facade. The damaged drone then fell to street level where it hit a car. In this case, police were able to identify and arrest the operator.

In Seattle, police have also investigated an incident after the operator of a drone over the city similarly lost control and hit a building. In this case though, whilst the building was undamaged, the drone which weighed two pounds fell into a crowd of people below who were watching a street parade. It struck a 25 year old woman on the head, knocking her unconscious.

Its not just the hobby drones that cause problems. Last year, at a Triathlon in Western Australia, a professionally operated drone filming the event fell from thirty feet, striking one of the runners and causing a cut to her head. In this case the drone operator claimed that the runner was simply looking at the drone instead of where she was running, tripped, and hit her head on the road surface, although witnesses disputed that version of events. This summer, in Mexico, a drone was being used at a rock concert to give a flying view over the heads of the audience. As it reached the stage, star of the show, Enrique Iglesias, reached up to grab it but caught his fingers in the rotor blades. He continued the show with an increasingly blood-stained t-shirt, and later needed reconstructive hand surgery to repair the damage.

But with drones becoming commonplace, and the fiendishly-difficult skills needed to fly a copter now reduced to a computer program inside a controller chip, how long will it be before someone tries to build themselves a personal quadcopter, a 21st century version of the personal jetpack that sci-fi promised us for so long? Its the sort of thing you might expect to hear of in Texas, but in the leafy suburbs of Britain? Showing that the spirit of Heath Robinson is alive and kicking, a Brit has built not so much a personal copter, more like a flying bedstead to which he has attached no less than 54 propellors, a garden chair, what appears to be an umbrella, and an awful lot of wiring and batteries. It is called The Swarm, appropriate because it sounds like a thousand angry wasps.

In one way it is impressive that someone has worked out a way to scale the technology to achieve enough lift to carry a man, with enough battery capacity to make a ten minute flight, and even more impressive that he was brave enough to take his invention for a test flight to a height of 15 feet, but its not exactly going to change the face of personal aviation as we know it. When you consider that the project cost around Ł6,000 for the hardware, I think most of us would have been asking ourselves "Flying bedstead or holiday in the Bahamas?" I think I know how most would answer that, but that's the spirit of invention for you,... and he kept his socks on. 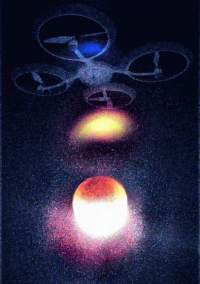