Technology doesn't let us walk through walls, but it may allow us to see through them, thanks to the electromagnetic radiation beaming out from our WiFi routers and mobile phones.

WiFi signals, radio waves, microwaves, X-rays, and the light waves we use to see things are all essentially the same thing, differing only in the frequency of the wave. We are all used to the idea that light travels in straight lines, casts predictable shadows, and can sometimes go through solid objects like glass, and reflect off other objects with shiny surfaces. Much the same is true of radio waves except they go through the walls of our houses, and through our own bodies too.

If we could see in the part of the spectrum used by WiFi then today's houses would glow like dimly-lit paper lanterns, with vague flickering shadows as people moved around inside. We can't see in that spectrum, but electronics can, and researchers at MIT have built a camera which can do just that.

The MIT researchers have used a wifi-spectrum illuminator to light up a room through a brick wall, and detectors which record the images coming back. The clever part is their use of algorithms to analyse the reflections and distortions in the wifi illumination, combine the data from multiple images, and reassemble all that data into something which looks like a thermal sensor image, and which can detect motion to within a few centimeters.

At the moment this is an academic exercise although it reminiscent of the motion detectors in Alien and no doubt we will soon see this wired into a TV drama where hi-tech western technology saves the day yet again.

On a more practical note though, what use would this technology be, if it is developed to the stage where it can be consumerised? Some possible uses suggested are for non-intrusive monitoring of the elderly, but simply asking them to wear a bio-bracelet would be a simpler solution. I think a more interesting possibility lies in the field of medical scanning. WiFi and radio is so safe compared to X-rays, and it may open up fields of research for safer and cheaper scanners.

Not surprisingly though, some people ask if the main customer for futuristic X-ray spex would be burglars who would use the devices to case the joint before a break in? Would they be able to identify the empty homes just by looking through the walls? Burglars don't need this though. They already have a piece of technology which let's them determine if anyone is at home. Its called a doorbell. 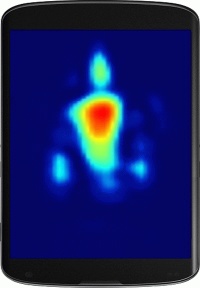