"Eldrick", properly named LDRIC, the Launch Directional Robot with Intelligent Circuitry, is just a fancy name for a robot that's been designed to play golf. Golfing trivia nerds will, of course, be able to tell you that the real name of golf legend Tiger Woods is Eldrick Woods, hence the robot's acronym.

Looking at the robot, you can't help but think its a sci-fi caricature. Here is a video of it playing the 16th hole of the Scottsdale Golf Course, where Tiger Woods famously managed that rare feat of a hole in one. The video doesn't show LDRIC's first five failed attempts to hit the ball, but does show the more successful sixth.

If a robot golfer doesn't seem creepy enough, Hasbro's robot cat surely will. Toys-R-Us already sells "FurReal Friends", robotic animals designed for kids as toys, but they clearly are toys, mimics, fun things, just an evolution of the wind-up robots with flashing eyes and the dolls with eyelids that closed when you tilted them. Hasbro's "Joy For All Companion Pet" is different. Its designed to take the place of a real cat as a low-maintenance household pet. Its designed for grown ups.

Call me old-fashioned but if you can gift wrap it, it isn't really a pet. 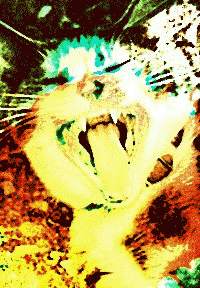