The mountain and the mole hill

Ben Nevis, the tallest mountain in the British Isles is even taller than you think. This month the Ordnance Survey has increased the height of Ben Nevis as printed on its maps, from 1,344 meters to 1,345. Is the Grampians having a growth spurt, or is modern technology to blame?

Whilst the British Isles are gradually changing in height, and parts of England may sink by up to 5cm over the next hundred years, the change to Ben Nevis reflects changes in measurement technology rather than geological movement. When it was last measured in 1949, the Ordnance Survey put the height of Ben Nevis at slightly over 1,344 meters. Now, thanks to high precision GPS, we know it is a fraction taller than previously thought, 1,344.527 meters to be precise, and that small increase is enough to round the figure up instead of down. Hence the OS revision to the record books. This video from Ordnance Survey and the photos of the trip are a reminder that a trip to the summit of Ben Nevis isn't a walk in the park.

This revision doesn't change the world in any way, but it does show how unbelievably accurate modern technology is. The height was measured using a GPS system. The GPS built into todays satnavs and phones calculates our position in a three dimensional space: latitude, longitude, and altitude above the surface. However, the altitude measurement is typically about ten times less accurate than the surface position, and a phone atop Ben Nevis would have an error of around five meters.

The geodetic surveyors take many measurements to reduce errors and also take signals from specialist GPS transmitters located at ground stations, and are able to come up with the revised figure of 1,344.527. And in case you haven't appreciated how astonishingly precise that figure is, it is 1,344 meters, 52 centimeters, and 7 millimeters.

The other thing to come from this result is a better appreciation of the work of the 1949 survey. How did they measure the height above sea level when you can't even see the sea from the top of Ben Nevis? They measured the angles and elevations to neighbouring mountain peaks and in turn measured the heights of those peaks relative to other points, working their way back to sea level.

The 1949 team had to work at night so that they could see the bright lights which were shone from the trig points on those other mountains, and it required a team of seven surveyors who had to haul around two hundred pounds of equipment up to the summit each night over a twenty day period, including heavy car batteries to power the equipment and lights.

When all those measurements were taken, they then had to crunch all the numbers by hand using pencil and paper, and if you think the maths sounds hard, add in the complication that you also have to take the curvature of the earth into account. And still they managed to come up with an answer which was only a few inches different from the best we can do today. 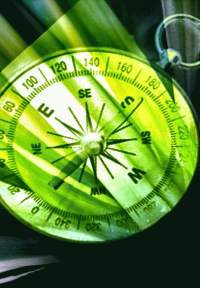