Be careful where you point that camera

Ever since the 9/11 attacks, governments and police forces around the world have used the threat of terror to take away liberties and reduce our expectations of privacy on the grounds that it is for our own good. It is inevitable that, in a surveillance society, the police and politicians themselves will come under the spotlight.

There are over 4 million CCTV cameras in Britain watching our every move, as well as number-plate recognition cameras which build up databases of where and when we travel, and mobile phones which record our movements from cell to cell. Police forces have been quick to embrace all this technology, and are all too happy to work with TV companies in the making of real-life programmes such as "Interceptors" which invariably paint the police in a good light, are cheap entertainment, and show little evidence of critical objective journalism or questioning of police actions. But in this age of cheap video recorders embedded in mobile phones, it is inevitable that the police themselves will now be caught on camera. It is directly as a result of incidents being captured on video by members of the public, and made public via sites such as YouTube, that Scotland Yard now faces three enquiries into the death of Ian Tomlinson and two other alleged assaults at recent demonstrations.

For years, police have openly photographed people taking part in organised protests, whether peaceful or not, but are less happy about being photographed themselves. Now, following the introduction of Section 76 of the Counter-Terrorism Act, 2008, police have sweeping powers to act against anyone using a camera if, in the judgement of the officer, it is "likely to be useful to a person committing or preparing an act of terrorism". But surely such laws don't affect you and I, going about our daily lives? If that's what you think, think again.

Reuben Powell, an artist who has spent 25 years drawing and photographing the buildings of south London was arrested in January under the Prevention of Terrorism Act and spent five hours in a cell when police officers saw him take a photograph of an HMSO book shop and deemed him a security risk. They also confiscated his completely legal folding penknife which he uses to sharpen his pencils.

Even more absurd, 15 year old schoolboy, Fabian Sabbara, was stopped and questioned by three Police Community Support Officers last October after he used his mobile phone to take a photo of Wimbledon Tube Station. He was in school uniform at the time and part of a school-organised group doing a traffic survey for a GCSE project. His details were taken under a Section 44 Stop and Search counter-terrorism procedure.

A photography enthusiast in London, Piers Mason, could have been forgiven for thinking it was an April Fool joke when he was stopped by police and questioned for 20 minutes after he took this photo of a news crew setting up to film an interview.

The officers finally sent him on his way after logging his details (which will now be entered into the police database) and giving him a copy of a "5090(X)" form on which an officer has scrawled that the grounds for the search were "Outside Royal Bank of Scotland taking photographs" and rather confusingly added "Asked to action per actions."

Every week a new story emerges about police over-reacting to photographers. In this clip, Birmingham film-maker Darren Pollard, filming from his own garden, is questioned by two police officers who seem to have only the haziest understanding of the law, who simply repeat "it is an offence" parrot fashion, and do not think any apology is necessary when they discover they are in the wrong:

Of course, the majority of police officers do a very good job in difficult circumstances, and have excellent attitudes and community values. The criticism is primarily levelled at the politicians and senior officers who set the tone of modern policing, and it is good to see prominent figures speaking out against them. Former Scotland Yard commander, David Tomlinson, has voiced concerns about a crisis of leadership in the force, and the morphing of British policing into a US-style operation where officers wear increasingly military style uniforms, are equipped with tasers, and are taught to "Regard every situation, no matter how seemingly benign, as a threat situation. The lesson is that the public are your enemy".

Equally forthright is Nick Hardwick, head of the Independent Police Complaints Commission. "Police need to remember they are servants, not masters, of the people", he warned. 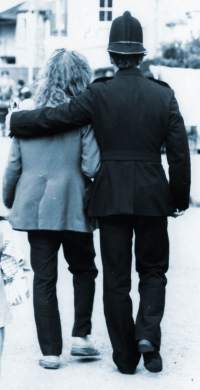