Wiring up to the braingate

Connecting computers to the brain is the stuff of science-fiction but a group in America developing the neural interface is about to embark on clinical trials.

Using the brain to control electronics has significant potential in the medical field. It could be used to control prosthetic limbs and give them a more natural control and range of movements, it could be used to bridge gaps in damaged nerves in some forms of paralysis, and of course it can be used as a way of operating a computer, an electric wheelchair or any other suitably adapted equipment such as lights, heating and telephones.

Earlier attempts at wiring up the brain to electronics have not met with great success. Wired connections were clumsy, prone to damage, and presented a significant risk of infection. In response to these problems, The team at Brown University, Rhode Island, working on the Braingate are aiming to develop a tiny 4mm square self-contained array of sensors which can implanted under the skull and communicate with its control unit using low power radio signals.Whilst it still requires surgery to implant the device, it appears to be a big step forward over earlier technologies. 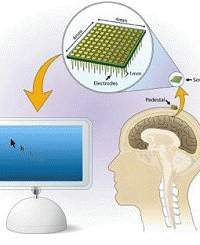