Where does the spam come from?
We all like getting feedback on our websites, especially when it is complimentary, but increasingly spammers are using feedback forms as a way of getting their messages past the spam filters.

House ransacked following Internet hoax
Associated Press reported the case of Robert Salisbury, from Jacksonville, Oregon, who's house was stripped of anything that wasn't nailed down following a fake advert on CraigsList saying his possessions were free for the taking.

Reading the small print in online services
Adobe has launched an online version of Photoshop but has had to hurriedly rethink its terms and conditions of usage.

Put Bruce Willis on standby
A German schoolboy has corrected calculations made by NASA and discovered we are a hundred times more likely to be hit by an asteroid in the next 25 years than previously thought.

Making a mountain out of a toll bill
Graeme Ellis of Swanley ask for a receipt for his London congestion charge, and had over 3,000 of them delivered to his letterbox. 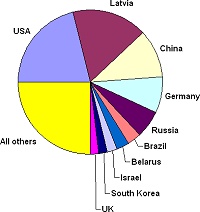