Tom Tom turn around, don't ever let me down

Tourists have once again proved our blind faith in technology when they followed directions given by their satnav and ended up embedded in a mud flat.

Three Japanese students visiting Australia's Gold Coast rented a car complete with built-in GPS. Not knowing the area, using a GPS sounds like a good idea. However, it needs to be mixed with an ounce of common sense. They wanted to visit the popular tourist destination, Stradbroke Island, but ended up embedded in a mud flat surrounded by sea water when they tried to drive there. Even the tow trucks haven't been able to retrieve the vehicle.

"The GPS told us we could drive there", the 21 year old driver insisted. Now perhaps some of you are thinking that it was a reasonable mistake to make. Sometimes we call things islands, and they are not really, like the Isle of Dogs, or the Isle of Purbeck. Other times we see coastal roads which are covered by an inch or two of water at high tide but are still passable. But Stradbroke Island is 10 miles out at sea, and it takes the ferry 45 minutes to get there.

An image of the mishap was captured on camera:
static.lifeislocal.com.au/multimedia/images/full/1767158.jpg

Still, it says something heart-warming for human nature that the driver was able to say "We want to come back to Australia again. Everyone has been very nice to us,... even today." 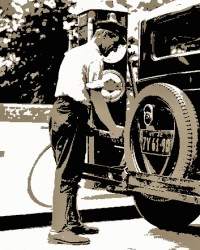