Surprisingly, there are legal reasons why the postman isn't allowed to leave parcels or letters requiring signature with your neighbours anymore, (Postal Services Act, 2011), but those same rules do not apply to private courier services, only to letters and parcels sent through the mail. This means the post office has to spend time and money dealing with a lot of undeliverable items which puts them at a significant disadvantage to courier companies who can already cherry pick the most profitable markets.

Ofcom wants to change this and has conducted trials of "delivery to neighbour" since October 2011. On the whole, the trials went well, with most people surveyed not realising the trial was taking place despite receiving leaflets about it, and most not realising the law prevented the postie leaving packages with neighbours anyway.

For people who don't want neighbours to collect their mail, Ofcom has provided stickers you can put on your letterbox to let the postman know that undelivered parcels must go back to the sorting office for redelivery. Of course, if you use one of those, your neighbours may interpret that as saying you don't trust them, so perhaps a more discrete approach could have been used. It isn't clear if people can opt out of being asked to receive parcels on behalf of neighbours.

Ofcom is now undertaking a public consultation, (and like all public consultations, its so well hidden you'd think they are trying to keep it a secret from the public). The consultation document was published on 11th July, and closing date for responses is 24th August. 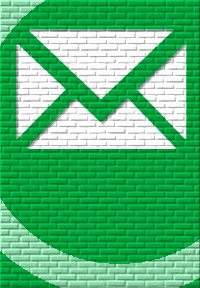