Pussy Riot is a ten-person strong Russian feminist art collective styling itself after the Riot Grrl bands of the mid-1990s. It has engaged in a number of political protests. The performers wear bright dresses, tights, and colourful balaclavas to mask their identities. In February of this year they attempted to stage a protest performance inside Moscow's Cathedral of Christ Saviour. The song they wanted to perform, Punk Prayer, uses colourful language to call on the Virgin Mary to become a feminist, end the support of the Russian Church for president Vladimir Putin, and the removal of Putin from office. In staging this protest, they committed the cardinal sin of attempting to sing in a part of the cathedral reserved for members of the priesthood.

The performance was quickly broken up by church staff and police, but the incident was filmed, placed on YouTube, and became a viral video hit worldwide. Several weeks later, three members of the group were identified from other videos, arrested, and in what is widely seen as a political show trial against dissidents, have been charged with hooliganism. The three have already been held in a harsh prison for five months awaiting trial and for the first three months of that detention, they didn't have a trial date set, a fact which itself led to protests from international civil rights organisations. The trial finally began in July (conveniently pushed off the front pages by the London Olympics). Amongst other things, the prosecutor said that the accused are self-confessed feminists, branded feminism a mortal sin, and said the women were a danger to society. The viral video which sparked this massive over-reaction can be seen here:

This case also illustrates the power of the video image and how easily we are deceived. That video has been heavily processed. It was only when I saw the original unedited video footage that I realised just how tame the protest really was. The soundtrack in the viral video was dubbed on top and images spliced together to give the impression that much more was happening. The unedited video is more reminiscent of a Smack The Pony sketch, with a line of girls attempting to dance to music played on a portable cassette player. You also see that the police were surprisingly quick off the mark to break up the protest before it began. The following is the original unedited footage. If they'd released this instead of the "pop video" version, do you think it would have gone viral, and do you think the state would have been so eager to hammer home a prosecution?

Voices around the world have condemned the state reaction to a political protest, with some journalists describing the court proceedings in Russia as medieval and more akin to the inquisition than to a fair trial. A chilling account of the trial conditions has been presented in The Guardian.

Pussy Riot has become a cause celebre, with support coming from 121 members of the German parliament, and from names in pop such as Pete Townshend, Jarvis Cocker, Bjork and Yoko Ono. Madonna happened to be on tour in Russia, and in Moscow she performed "Like a virgin" in a Pussy Riot styled balaclava, which led to the Russian Deputy PM calling her a moralising slut, and a priest urging "believers" to phone in bomb threats to disrupt her next gig planned for St Petersburg.

Putin appears to have been taken aback by the bad press it is creating. During his trip to the Olympics he appeared to be trying to distance himself. He criticised the group for protesting in a church, but added "Nonetheless, I don't think they should be judged too severely for this, but the final decision rests with the courts. I hope the court will deliver a correct, well-founded ruling." He also seemed to think he could justify the state's actions by pointing out that if a similar protest had taken place in Israel or a muslim country, "we wouldn't even have had time to detain them". Perhaps the prosecutor took Putin's words into account in his summing up when he called for a prison sentence of three years in a labour camp, a significant step back from the seven year maximum sentence.

Popular music has a history of protest song and social conscience. Technology and the internet lets those protests be more creative, more effective, and more widely heard. This 2004 video by Le Tigre, itself a band with Riot Grrl DNA, is a montage of news clips and a fusion of sound samples to create something that looks scripted and composed. It is a creative intelligent anti-war protest, and how often do you hear punk rock quoting the words of Eleanor Roosevelt?

FOOTNOTE: After a two week trial and a week contemplating her decision, the judge has today declared that Pussy Riot are guilty of hooliganism motivated by religious hatred and cited "jerking of limbs during the performance" as "further proof of hatred towards Christians". Each band member has been sentenced to two years in prison. 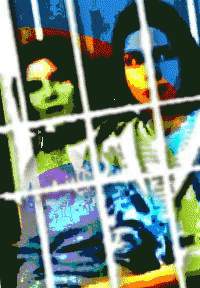