Hong Kong University recently arranged a demonstration for the press of its 1.9m high, 150Kg robot performing a series of Tai Chi moves. Unfortunately the robot showed how truly lifelike it is by tripping over a step and breaking its ankle.

We've had robots in the industry for many years, performing repetitive tasks such as painting cars and assembling components, but the headline-grabbing thrust of robotics at present is in building the autonomous robots we associate with sci-fi which can replicate animal or human movements. Some are remarkably advanced in this regard, such as the Japanese Miim robot which stands at 5'2", and weighs 43 kilos.

Is that really a robot, or an even smaller girl in a robot suit? Why do we feel the need to build such human-like robots at all? One very sensible use of a human mimic is in clothing testing. If you are manufacturing garments such as safety suits, one question you need to answer is how does it stand up to repeated normal usage. Does the fabric stretch out of shape? Do seams split? Boston Dynamics has developed a robot to do just this sort of testing to destruction. It isn't an autonomous robot and it can only repeat a series of movements programmed into it, but it can systematically repeat those movements over and over again. This video shows it testing a chemical protection suit and gas mask for the US Miliary

My favourite self-contained robot has to be one from Boston Dynamics which is dubbed the Wildcat, but looks much more like a crazed diesel-belching Terminator Sheep. This video is remarkable because you will see in the slow motion sections just how true to biology it is in its running styles, and once it has built up a head of steam it becomes airborne between steps. 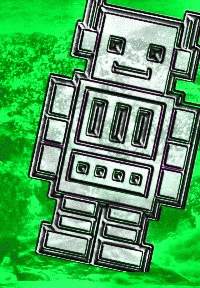