Okay, that's a bit of am exaggeration. A more accurate headline would have been "Robot attempts to eat woman but is rescued by heroic firefighter". Yes, I admit it, that's still being liberal with the facts.

The Kyunghyang Shinmum, a newspaper in Seoul, South Korea, reported that the incident happened to a local young woman who was asleep on the floor at home. Unlike in the UK where we raise our beds on legs, her bed was in the traditional futon style of a mattress at floor level. She had forgotten that her robot vacuum cleaner was set to sweep the area, something she was painfully reminded of when it sucked in five inches of hair before discovering her head was too big to swallow, but still it steadfastly refused to spit out the hair it had already got hold of. The local fire brigade came to the rescue, dismantled the errant robot and allowed the young woman to escape with her hair intact.

Man bites dog. That's another good staple of headline writers. That's not quite accurate either though. In this case it was actually man kicks dog. And the dog wasn't a dog, it was a robot, and its called a dog but looks more like a terminator sheep with no clothes on. But still, people took to twitter and complained that kicking it was cruel and the video makers should be ashamed of themselves.

The dog in question is the latest design from the military robot specialists, Boston Dynamics, who look at how real animals cope with walking, balance, and awkward terrain, and are building fantastic robots which mimic those styles and which can cope with all terrains. Last year they built the diesel powered Big Dog, and now they are working on Spot, a smaller electric version.

This video shows Spot in some of his field trials. When I first watched it I half wondered if this was a real video or an animation created by the latest CGI, but Spot does seem to be real. One of the tests to see how Spot copes with adversity is to give it a hefty sideways shove while its trying to walk over icy tarmac in the car park. It adapts remarkably well, but even though its a robot, when you see it scuttling about trying to regain its balance, and hear the disgruntled whir of its electric motors, you can't help but feel it looks a little upset by this heartless treatment and you'll find yourself saying "awww". 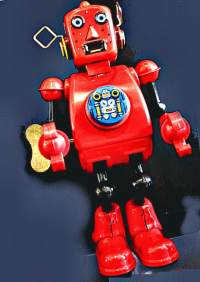