Is the web getting sluggish, is your phone line not as fast as it used to be, or is it just your computer that's slowing down? Chances are your computers and phone lines are fine, and its a severe case of web page bloat.

When the web first started finding its way into people's homes in the mid-90s, we had seriously slow modems, and not that much processing power or memory on the average PC. In some ways, this was a good thing because it forced the software engineers to think of good solutions to the problems of communicating over the internet, such as intelligent cacheing, on-demand compression of text data, and very efficient compressed graphics formats such as JPEG and GIF.

Today, we have vastly better computers and blazingly fast broadband speeds and yet looking at some websites is still a painfully slow experience where you click and wait, and wait, and wait,... waiting for graphics to load, waiting for the wheel to stop spinning. If you have noticed that, you are not alone. Even the mainstream press is beginning to notice that the web just doesn't feel as fast as it should. In shopping surveys, 67% of online shoppers quote slow loading times as the top reason for them abandoning purchases, whilst a survey by Harris Interactive found slow loading had caused some users to swear at their phone (23%) or even scream at it (11%).

It isn't just the sheer volume of visitors to top sites which is to blame for this poor performance.Specialists in this area, Website Optimization, have looked into this and concluded that modern websites have a serious case of page bloat. Back in 1995, the average web page was a total of 14 KB of data and an average of 2.2 objects per page. In July 2015, the same monitoring statistics for the top 1,000 websites shows the average web page is now more than 1.5 MB of data, made up of, on average, 112 objects on the page. Recent trends are for these figures to double every three years.

Other sources are noting the same effect. The Mobile HTTP Archive is reporting that the average payload delivered to mobiles, (where bandwidth is often more limited and expensive), was 511 KB in 2012, and has doubled over the last three years to 1109 KB today. Whilst mobile versions of websites often look like stripped down lightweight clean versions of the full site, the reality is that this is largely cosmetic presentation, and the amount of data which the browser has to deal with is the same in both cases.

It has long been known in computer system design that users hate waiting, and it was established many years ago that when a computer takes longer than three seconds to respond, people perceive it as slow, a statistic that has been reconfirmed many times since. Researchers working for Radware, who run Web Performance Today, have studied "bounce", the amount of time a user will wait for a site to load before they give up and go elsewhere. They have identified that the bounce time depends on the type of visitor. People who visit your site because it is bookmarked tend to be the most tolerant of slow performance, and even on pages with a wait time of 15 seconds, only 40% of them would bounce. People who are visiting you by following a link in a search engine are less tolerant, with a 55% bounce rate, and the group most likely to abandon a visit to a slow site are the ones who have followed a social networking link such as Facebook. In this category, the bounce rate was up at 85%.

Of course, it isn't just graphics which is adding to the delays with loading web pages. There are also style sheets, fonts, embedded videos, all of which rack up the bandwidth requirement, but these are things we don't really want to do without. Many sites though rely on javascript frameworks, and it is not unusual to see sites pull in 30 to 60 KB of dense javascript to achieve one small animation which adds nothing to the information content. There is also content pulled in from other sites, such as Twitter feeds, applets such as weather reports, and pictures from photo sharing sites which are often a bottleneck in the site's performance. And then there is all the tracking and third-party analytics which many websites attempt to use. Researchers at Mozilla and Columbia University looked at news sites and say the tracking reduces some of these pages to a crawl, and that on a test of the top 100 news sites, blocking the tracking scripts improved load time by 44% and reduced bandwidth requirements by 39%.

Since 2010, Google has been using website response speed as one of its metrics in determining how high to rank sites in its search results. It now looks like it is going to make this much more visible and, from this month onwards, is posting "Slow to load" messages alongside offenders in its mobile search results. 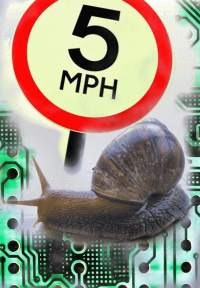