Hollywood loves CGI, but great video doesn't have to be computer generated. The OK Go group continues to show the world how to produce compelling video from basic ideas.

OK Go is an alternative rock group, originally from Chicago but hanging out these days in Los Angeles. Ten years ago, when YouTube was still in its infancy, it created the then original, and since then much-copied one-shot treadmill video for its song, Here It Goes Again. This was one of the early "viral" videos, and it has been watched millions of times since then.

When you watch that 2006 video in 2016, you can't help but notice that the 4:3 format looks odd now that we have all got used to our 16:9 TVs, the colours look slightly yellow, and perhaps the image is not as crisp as we have come to expect from video cameras today. But still, the idea behind it is simple and compelling.

OK Go have continued to make eye-catching videos of their songs, and this next one, Skyscrapers, makes exquisite use of a rainbow of colours. It is easy to imagine that a major studio or ad-agency shooting this would want to use CGI to create sanitised scenery and impossibly seamless colour transitions, but OK Go used the gritty reality of the physical world and whilst it wasn't one of their typical single-shot videos, it was shot from a static viewpoint.

The group's latest video is perhaps its most high-tech ever, in that it was shot aboard an aeroplane flying the elliptic flight path to create weightless conditions. This is gymnastics in zero gravity. The video itself makes the point at the start: Everything you are about to see is real. There are no wires or green screen effects. This was shot in an actual plane, in the sky. 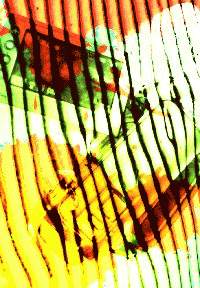