Do you remember what you were doing on 12th August 1981? To help jog your memory, episode number 2125 of Coronation Street was being shown on TV, in which "Gail sees Glenda fondling Brian's muscles at the garage". Such innocent times.

PC celebrates thirtieth birthday
On 12th August, the PC celebrated its 30th birthday. Few would have imagined that thirty years later we'd still have the same basic shape box and still refer to the hard disk as the "C Drive".

Courts swallow Apple's tablets
How free is a free market? Apple has been visiting European courts seeking injunctions against the sale of Samsung's Galaxy Tab, alleging that the Samsung tablet violates its "Registered Community Design rights" in the iPad.

Is this headline a literary work?
In a complicated judgement, the Court of Appeal has upheld an earlier High Court Ruling that a headline to a news article is intellectual property, and UK news aggregator sites require licenses if they wish to scrape headlines from news publishers. 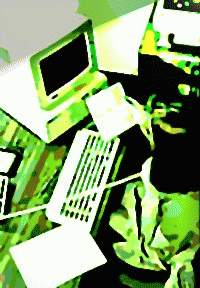